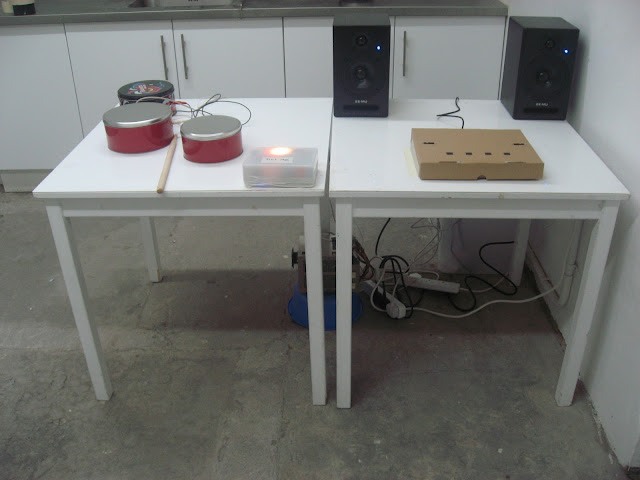 Last weekend was the dorkbot interactive musical installation at the BV Open Studios Weekend held in the Bristol Hackspace and the kitchen at BV Studios.

The Theremin Style Music Controller was set up in the kitchen along with two installations made by other dorkbot members: Richard’s biscuit-tin rhythm copying drums and John’s Tilty music box. Other installations included the Dorkbot Pisano wheels and Aaron’s Monome style ball-bearing controller, which triggered Anton’s electro-mechanical glockenspiel, a coconut and John’s octophone and LED level meters.

Thanks to all the people who came and had fun playing with the installation!

I’ve built a music controller that senses hand movements, in a similar way to a Theremin, for an interactive musical installation dorkbot bristol is exhibiting at the BV Open Studios 2011 this October. I’m hoping that people will be able to have some fun playing with the sounds of some music sequences being synthesized on a Mac by moving their hands in front of it. It has two sensors which measure how far your hands are above the box so you can move your hands up and down to control different aspects of the synthesized sounds. There are also four touch sensors that change the sounds being played when you rest a finger on them.
The aim is that the player should be able to explore the sound with their hand movements, the hand movements do not create the music itself. In this way, it should not require any special musical skill so anyone can have a go and make nice sounds, unlike a musical instrument like the Theremin which requires skill to play a tune.

I wanted the hardware build to be as quick and simple as possible so the sensors are mounted in a cardboard box. The unit plugs into a Mac running Reaktor and controls the music being produced.

The electronics components used in this project are: