The Gakken SX-150 synth has a stylus which is touched on a continuous strip to control the pitch of the sound. It’s hard to play tuned notes using the stylus and so a MIDI interface for the SX-150 is a good mod to make the synth more usable. For this reason, several MIDI interface designs have been developed, including designs by RJ, Stray Technologies, Narbotic Instruments and Mrbook. All of these interfaces convert MIDI to a voltage (MIDI to CV interface) which is connected to the stylus.

The Narbotic and Mrbook design are both Arduino based, the others microcontroller based standalone circuits. I’ve had a go at making RJ’s design, prototyping it on a breadboard. The circuit works well, although as RJ points out, the accurate tuning range is about 2 octaves. Beyond that, the tuning needs tweaking to the higher octaves using the pot included in the circuit. 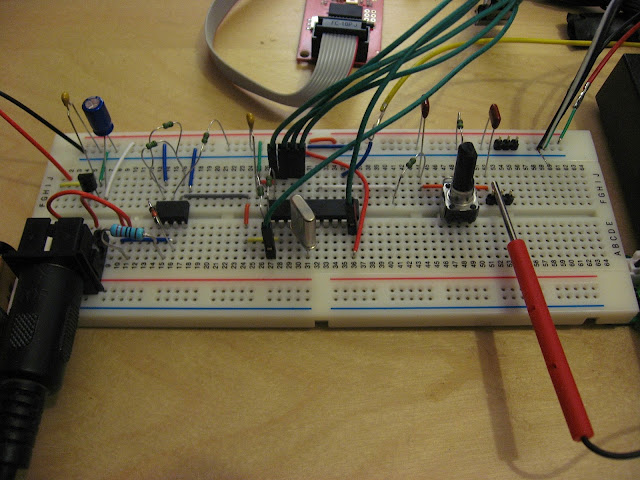 The circuit uses all the components described by RJ, except I swapped the TLP552 optocoupler for a 6N137. I used avrdude to program the attiny2313 microcontroller using a Sparkfun AVR programmer.

One gotcha that’s worth pointing out in getting this circuit to work is that the attiny2313 ships programmed to use the internal clock oscillator at 1MHz, but the circuit is designed to work at 20MHz using the connected crystal. The serial interface to the MIDI input is set up in the code to work at 20MHz, and will not work at 1Mhz. This is because, roughly speaking, the UART in the attiny2313 cannot be set to run quickly enough to accurately receive MIDI at 31.25kHz baud for a system clock of 1MHz in asynchronous receiver mode. The clock can be set to use the external 20MHz crystal by programming the ‘configuration fuses’ using avrdude. The oscillator configuration is set in the lower fuse bits. These can be read using avrdude as follows (this is for a Sparkfun programmer, option -c may need to be changed for other programmers):

Avrdude shows the default lower fuse configuration as 0x64. To use the external 20MHz crystal, the following avrdude command can be used:

The attiny2313 should be ready to be programmed with the hex code provided by RJ. This can be uploaded using avrdude using the command:

Update: I prototyped the MIDI interface onto a stripboard to have a permanent version of the circuit, here it is: 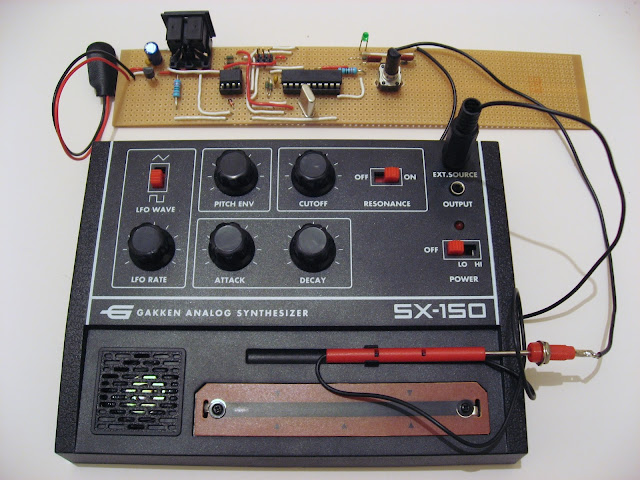 The Rockit kit arrived last week from HackMe Electronics. A few people have already built working kits, I’m looking forward to building and powering it up. There’s a fair bit of soldering in this kit, so those of us building a kit have our work cut out…

The Gakken SX-150 analog synth kit, distributed by Make, came in stock again recently and so I ordered one. Here’s the finished article: 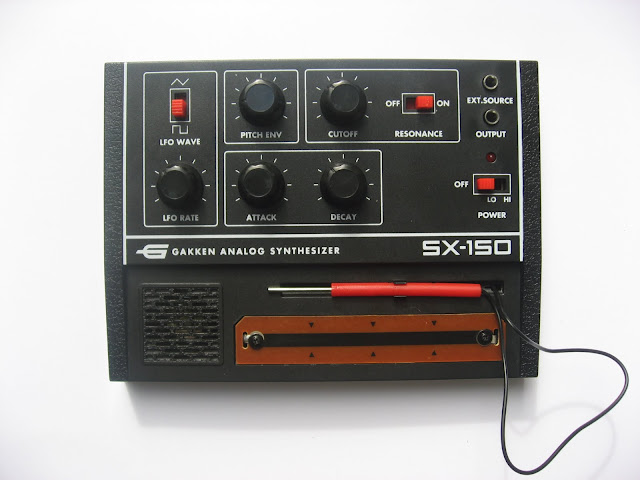 This is a nice kit for anyone starting out making, it simply screws together (no soldering needed). The SX-150 is played with a stylus with a continuous contact strip, there are no individual contacts tuned to notes, unlike the Stylophone. This makes it hard to play notes, but is good for sliding pitch effects. However, because it has a small but fully analog synthesis circuit, it can still make usable sounds. Make have published a hack to allow it to be controlled by MIDI which should make it usable for playing notes and sequencing.

The instructions for the SX-150 describe the principles behind the analog synthesis circuits so it’s potentially a good starting point for creating analog synth circuits or maybe even hacking the SX-150 itself. One hack could be to add more synthesis controls such as LFO depth and resonance level, amongst others.

The kit comes with a chronicle of synthesis which includes a section on hacking projects. I guess it would help if you can read Japanese… although a few ideas can be got just from the images.

My Meeblip DIY kit is now built and making noise! 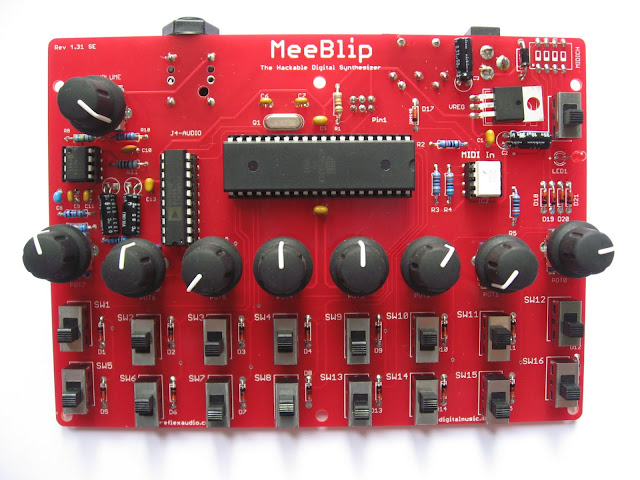 The hardware of the Meeblip is perhaps about as simple as a digital synth could possibly be: a microcontroller (with a good number of switches and knobs connected it), a MIDI interface to get notes in, a digital-to-analog convertor, and just enough audio circuitry to get sounds out. All the subtractive synthesis is done in the microcontroller, so it sounds like a simple soft-synth plugin. Except of course it lives in its own hardware, where the audio output circuit seems to add a bit of pleasing grunge to the sound.

Reflex Audio/CDM are steadily developing new versions of the Meeblip. The circuit board of this one is revision 1.31 SE which has some changes to previous versions: it’s now red, has a power switch, there is no USB power, and the connectors are mounted on the bottom to make positioning a front panel easier. There’s no case with the DIY kit (the quick build kit has a case), although there’s the option of the new SE case becoming available at the end of August, or even a home brew case…

The build instructions are easy to follow, although they are yet to be fully updated for the 1.31 SE board. So if you have a go at building this revision, one gotcha is that in order to check the power (step 3), all the power supply components need to be soldered in first, including the power diode, regulator and new power switch. One other thing to note is that the Meeblip needs a good low-noise external power supply, otherwise it can get some hum on the audio.